The 'Betroffenengruppe für TIs in Deutschland' is working on a vision for a protected property. There, TIs and electrosensives should be able to live together.

For the living space the lowest possible radiation intensity is sought. Because a significant reduction in radiation exposure is quite feasible on salty seashores! In addition, a protection concept according to the latest findings should be used. 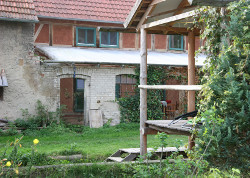 Those affected by organized stalking and covert electronic harassment are purposefully isolated. Usually they are alone and defenseless. Similar to Targeted Individuals, electrosensitive people suffer.

A shared property would be a solid base to help each other and in order to living in a better way. Big advantages of a living property for TIs and electrosensitives are that self-help in a community project can be organized easier and aid measures are much more effective to be realized.

Shared housing and living has become a desired goal from a handful of victims. The impetus for this came from Georg from Hannover in 2016. The discussion about a "where or how to realize ..?" has just begun.. -- more: initiative | contact

The property for TIs and electrosensitive is to consist of a housing and living area and a holistic health center. In the final stage, a settlement is sought that can reach the size of a small village.

All buildings and outdoor areas are protected as far as possible from the effects of radiation on the basis of modern physical knowledge and the experiences of TIs worldwide. -- more: housing & living

● Establishing a "Firewall" Against Radiation! updated

Mind-controlling radiation and electrosmog are inexorable. Among victims, little is known that there are already a lot of natural and technical possibilities that can effectively reduce the harmful influence.

This includes especially the salty water of large surface waters. It has a radiation-draining effect. This property is used as a radiation barrier for the proposed property: The project should be located on a European sea coast or a salt lake.

Buildings and outdoor areas are to be secured by a newly developed space protection. Its protective effect is complemented by orgonites and Tesla plates, diamagnetic minerals such as graphite and selected natural products. The diet is also used to promote health.
Measures also include the application of the so-called sacred geometry and the construction of a spherical harmonization system. -- more: protection concept

Telephone calls have already touched on some regions that seem suitable as sites for a TI estate because of their location on a saline body of water.

● Idea for a European project

What's next? The most important thing in this initial situation is to disseminate the project idea. As many people as possible - especially TIs and electro-sensitive persons - should learn about it. With every informant the chance for implementation grows! For distribution, the large reach of social media is particularly suitable.

The texts are first published in German (for Germany, Austria and Switzerland).
The idea providers understand the project across Europe. Therefore, the most important project information are to be translated into English. Other languages ​​may be considered if there is an interest in the respective country. -- more: Project pages in English

Interest in regions so far:

No comments posted yet.